Our story begins with an idea in the mind of a South Dakota farm boy come east.

Milton Johnson grew up in South Dakota, on a farm established by his Swedish immigrant father. In the 1950’s he left home to find work on the East Coast. He soon got a job in a Baltimore factory, but he missed the wide open spaces and the slower pace of life that he had left behind. Before long, his love of the soil and of planting led him to try a sideline in landscaping.

Always curious—and always looking for better ways to satisfy his customers—he became interested in finding a new way of establishing lawns. For hundreds of years, lawns had been started by sowing dry seed. But now a new technique, hydroseeding, was being offered by a few pioneering suppliers. It employed a mix of seed, nutrients, wood mulch and water that was sprayed onto the soil, and it seemed to offer a much surer and more efficient way of establishing a lawn. In 1964, he and a partner started Johnson Hydro Seeding Corporation, and they began delivering this improved product to their customers.

But Johnson still wasn’t satisfied. His customers were mostly contractors and developers, and he knew they were looking for a grass product with quicker results. They needed, he had learned, to abide by zoning regulations and bond commitments, and to show homes with curb appeal to buyers (and bankers!) with high expectations. Hydroseeding gave his customers better results, but it still took weeks for the seed to germinate and the new lawn to fill out, stabilize, and look presentable. In the meantime, the lawn was unsightly and vulnerable to damage from erosion and weeds. “There has to be a faster way to get grass growing,” he thought.

Sprinklers in the Basement

He began to experiment. What if the seed could be germinated before it was applied? His experimentation, research, and testing went on for more than 20 years. Spring, summer, and fall found him in the field; and many a winter day found him in the basement with seed, soil, and sprinklers.

Gradually, a method emerged. First, he discovered, the seedbed had to be carefully prepared, and the seed mixture tailored to the site, using seed that had been certified and pre-tested for seedling vigor. After years of trial and error, he developed the seed pre-germination technique that is still used in the company’s production laboratory today, and perfected the special blend of nutrients, wood pulp mulch, and water that is at the heart of the process. He invented and had manufactured customized equipment for application of the mix. And he designed a portable, automated irrigation system to provide each new lawn with just the right amount of water during its critical first days.

The results were astonishing. His lawns were emerging in three to five days instead of three to five weeks. They were virtually weed-free, and stabilized quickly, minimizing erosion. They could be planted anywhere, using existing soils, any time of year the soil was workable, at about half the cost of sod. And they were beautiful.

Johnson’s life was not entirely devoted to his work, however—he also had a family. Ever resourceful, he found he could combine the two by bringing his children to work. One by one, they began working for the company as youngsters, and when he retired in 1997 they took over the management of the enterprise he had started.

Today at Johnson Hydro Seeding, we do business with most of the major large-tract home builders in the region, focusing mainly on new-lawn establishment. FäsGräs is still our premier product, but we also deliver a comprehensive range of other services. A third generation of Johnsons have come to work for the company—Sam and Herb, Mike’s sons. Our company is a leader in the highly competitive regional market, with completed projects stretching from West Virginia in the west to Anne Arundel County, Maryland in the east. And we are still as dedicated as ever to finding better ways to satisfy our customers. 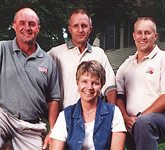 Johnson Hydro Seeding is a lawn installation contractor based in Rockville, MD, and serving the Washington metropolitan area.